Stanford is fully committed to diversity, equity, and inclusion, and the University’s course catalog proves it. Stanford students can take classes with titles such as “Race and Gender in Silicon Valley,” “Decolonizing the Western Canon,” and even “Conjure Art 101: Performances of Ritual, Spirituality and Decolonial Black Feminist Magic”.

But we at the Review think Stanford doesn’t go nearly far enough in its fight for capital-S Social Justice. All too many students graduate without learning basic social justice skills such as interpreting the author bell hooks through dance, understanding the “geoscience behind environmental (in)justice,” or analyzing how Latin American writers and artists have imagined queerness vis-à-vis the logics of global circulation of discourses on sex and gender.

To remedy this problem, we’ve come up with some essential courses that Stanford should offer ASAP:

In this “CS for Social Good” class, you’ll learn how to take problematic facial recognition technology used to spot terrorists and criminals and turn its focus to the real problem: your Ron DeSantis-supporting roommate. You’ll learn sophisticated methods like:

Prompt recognition and subsequent annihilation of fascists is an essential step toward a peaceful, thriving democracy. CS majors choosing not to take this class may be targeted by the algorithms enrolled students develop.

Being on the right side of history is a full-time job. Luckily, this class is here to help you develop important skills to succeed in modern activism. You’ll master high-level hashtag brainstorming, gain proficiency in mass-flier distribution, and learn to weather the trauma of capitalism in preparation for your summer internship on Wall Street.

In this class, we’ll problematize a quintessentially American genre of writing. Students will “read between the lines” to discover both visual and racial whiteness in menu margins and challenge the Eurocentrism of dishes like “Swiss cheese sandwich with French fries.” As a final writing project, students will produce inclusive menus of their own, mobilizing the rhetoric of lunch specials to deconstruct oppression everywhere–and produce top-notch academic writing.

Dreading the harsh grading curve of Math 51: Linear Algebra, Multivariable Calculus, and Modern Applications? Well, let X = equity instead! This class takes a liberatory approach to algebra, pushing past limits and prioritizing lived experience over dead white men. You’ll encounter all the skills normally taught in Math 51, but you won’t be required to learn them.

This class is a natural next step for students who learned high school math under the new California Mathematics Framework.

Stanford’s Neighborhood System has ushered in a dark era of redlining and segregation. In this class, we’ll uproot neighborhoods both figuratively and literally. Previous experience in toppling statues is highly recommended.

As per new COVID-19 guidelines, you can now party unmasked. But you know what else needs to be unmasked? The oppressive power dynamics that surround us. This class will help students develop liberatory, antiracist partying practices and normalize day drinking as a valid epistemological generative process. 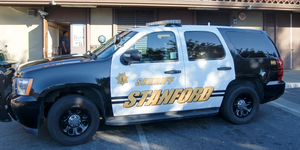 Is Blue-on-Black Violence on the Rise?