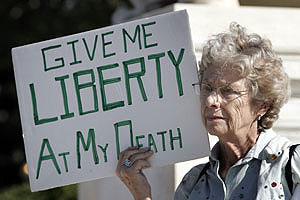 With over 11 million views on her YouTube video, more than four million visits to her fund’s website, hundreds of news articles about her, and a People magazine cover featuring her name and her story, Brittany Maynard’s public presence was undeniably a strong one, even though her life was only 29 years long. On January 1, 2014, Maynard was first diagnosed with brain cancer. Nine days later, after undergoing a partial craniotomy and a partial resection of her temporal lobe, doctors told her she would live up to ten more years. In April, however, once the doctors realized a tumor had not only returned but also had been elevated to stage 4 glioblastoma, Maynard was given only six more months to live.

In her op-ed for CNN, Maynard describes the side-effects of the recommended treatments and other care options. During a full-brain treatment, in her words, “the hair on my scalp would have been singed off. My scalp would be left covered with first-degree burns. My quality of life, as I knew it, would be gone.” She also researched hospice care, but she could potentially develop morphine-resistant pain, could undergo verbal, cognitive, and motor losses, and could stay in those conditions for years due to her young age. Instead of having to put herself and her family through either of those “nightmare” scenarios, Maynard instead opted to move with her husband from California to Oregon so that she could “die with dignity”; a choice that made her the face of that controversial movement.

Oregon was the first state which permitted physician-assisted suicide under its Death With Dignity Act (DWDA). Under the DWDA, mentally competent, terminally ill patients who have been diagnosed with six months or fewer to live can request and receive prescriptions for medication that they then self-ingest to end their suffering and their lives. Since the Act was enacted in 1997, a total of 1,173 people have had prescriptions written under the DWDA and 752 of them have died from ingesting those medication. The median age of those patients was 71. Four other states — Montana, New Mexico, Vermont and Washington — have similar laws.

Maynard herself supported the DWDA; she launched the Brittany Maynard Fund to fight for death with dignity laws in other states and even titled her op-ed, “My right to death with dignity at 29”. Many, though, including religious and medical groups, are pushing back against the Act. Judie Brown, president of the American Life League, the largest Catholic pro-life organization in the United States, said of Maynard’s decision, “There is something that is as fundamentally wrong with her arriving at this decision just as it is for the person who jumps off a roof.” Brown and others like her argue that suicides, whether physician-assisted or not, violate the sacredness of human life, that exists from the moment of one’s creation to their natural death. Similarly, the New England Journal of Medicine, in 2013, cast a poll about the DWDA among its readers, who are primarily health-care providers. Individuals from 74 countries cast 2,356 votes; U.S. readers made up 1,712 of those votes. 65% of voters overall and 67% of U.S voters were against the idea of the DWDA. Opponents argue that physicians who assist a patient’s death violate “a fundamental tenet of medicine by contradicting the doctor’s role as a healer”. Physician-assisted deaths could also foreshadow physician-assisted euthanasia, in which doctors would take an active role in a patient’s death: for example, they might administer the lethal drug instead of prescribing it as they do under the DWDA.

Passing the DWDA in all states may also make physician-assisted deaths tempting options for those who are suffering from mental conditions, such as depression and bipolar disorder. Cardiologist Sandeep Jauhar cites that only 10% to 15% of the people who attempt suicide eventually die by their own hands and that “changeable” desire to die can cause a patient to abuse physician-prescribed lethal drugs.

In my opinion, the Death with Dignity Acts already safeguard patients who are not mentally competent from making this weighty decision; the Act states that the patient must be both “capable of making and communicating health care decisions” and “diagnosed with a terminal illness that will lead to death within six (6) month”. These conditions limit the availability of Death with Dignity to a very specific population: the mentally competent but terminally ill. As the opponents of Death with Dignity argue, doctors’ roles are to heal someone’s pain in the best way possible, however, those lethal drugs that they prescribe and that a patient self-administers may be the healing that specific patient needs.

To guarantee that physician-assisted death is the best option for a patient, Atul Gawande, M.D. and M.P.H., in his Opinions piece for The New York Times, advocates a simple questionnaire. He asks his patients their understanding of their own medical condition, what their goals are if their health worsens, what their fears are, and what trade-offs they are willing to make or not willing to make. From a patient’s answers, a doctor, like Gawande, can both determine whether the patient has unimpaired mental judgment and can work with this patient to decide the best personal option, be it medical treatments, hospice care or, in the case of Brittany Maynard, death with dignity.

No, Ebola Will Not “Cure” Africa

In late September, the Stanford Political Journal published an article entitled “Ebola Might Help the Cure for Africa”. Unfortunately, no 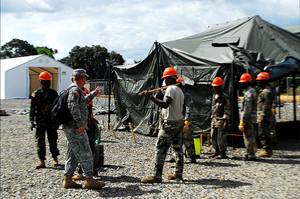