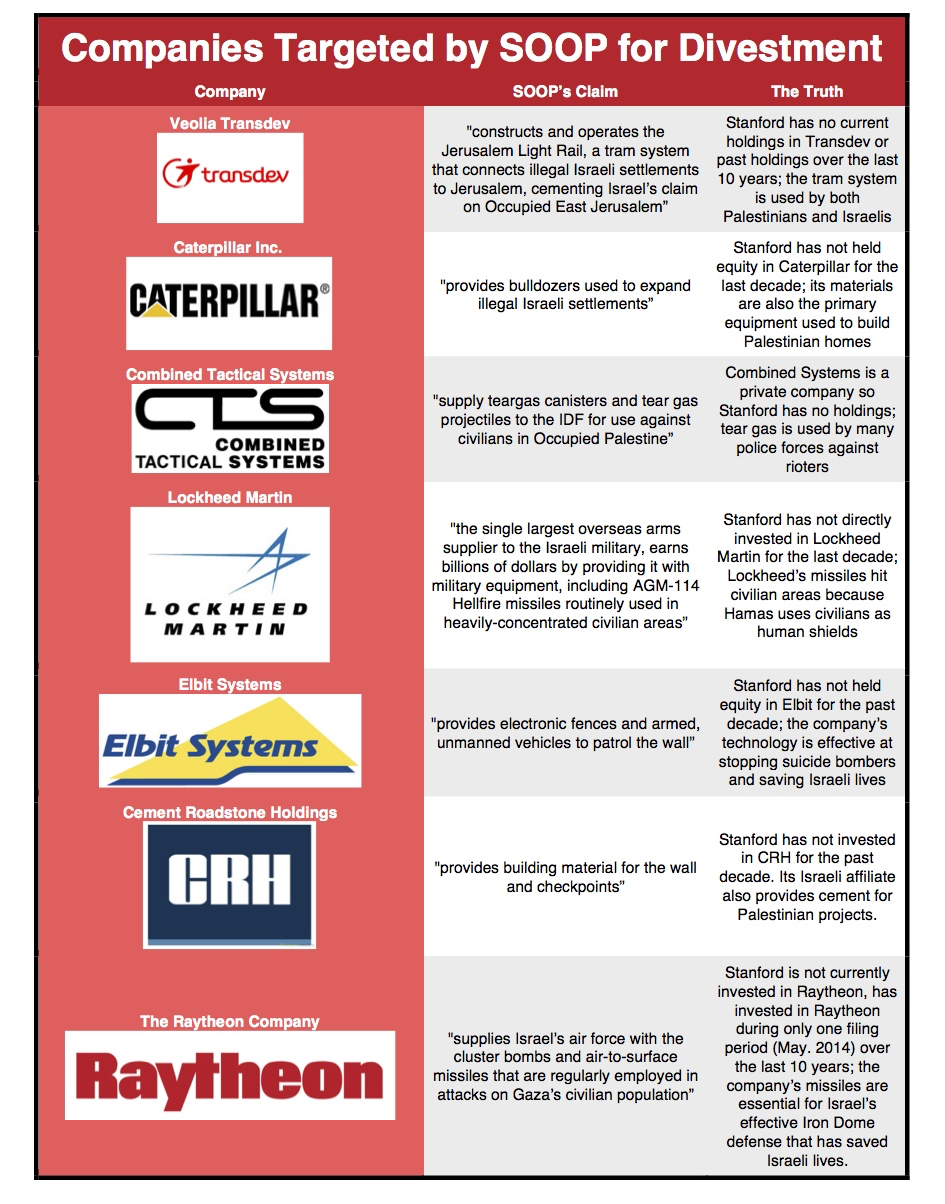 SEC filings reveal that Stanford is invested in none of the companies SOOP targets for divestment.

*The author would like to thank Andrew Aude, whose initial research into SEC filings inspired this article.

>
*Update*: SOOP has [updated its resolution](http://www.soopalestine.org/divestment-resolution.html), one day before the ASSU will vote on it. They added a line recognizing Israeli security rights, and named one new company, Eaton Corp., in which Stanford was invested in March, 2014. This company, however, was recently named the [#25](http://www.thecro.com/files/100BestList.pdf) best corporate citizen in America by Corporate Social Responsibility Magazine.
Stanford Out of Occupied Palestine (SOOP) regularly denies it wants Stanford to delegitimize or divest from Israel. In its [68-pages of materials](/content/images/DivestmentBinderFinal.docx.pdf) urging the ASSU to divest from corporations that profit from alleged Israeli human rights abuses in the Palestinian territories, SOOP repeatedly claims “…our university endowment is currently invested in companies that inflict substantial social injury upon students of Palestinian origin”. SOOP uses this claim to call for divestment from those specific companies.

However, an analysis of the Stanford endowment’s quarterly SEC filings from the past decade shows no evidence that Stanford’s endowment is currently invested in any of the companies cited in the divestment materials. The filings also show no evidence that Stanford has been invested in any of these companies over the last ten years, with the exception of Raytheon for just one filing period. Moreover, in light of the significant proof that SOOP associates with the radical Boycott, Divestment, Sanctions (BDS) movement and disseminates materials calling Israel a “Jewish supremacist state”, it is clear SOOP is using this empty divestment proposal to delegitimize Israel and to implement BDS on campus.

SOOP cites three companies, Veolia Transdev, Caterpillar, and Combined Tactical Systems; however, Stanford has not invested in any of them during the past decade. First, SOOP criticizes Veolia Transdev for offering rail service from Jerusalem to settlements in the Palestinian territories. Stanford has no holdings in Transdev, but SOOP is wrong to target the company for another reason: its light rail serves both Israelis and Palestinians. Shutting down Transdev’s rail service would only impair the Palestinians’ already-limited freedom of mobility — something SOOP wants to fix.

Second, SOOP assails Caterpillar Inc. for selling bulldozers to the Israeli government, some of which are used to demolish about 200 unregistered houses in the Palestinian territories per year. Again, Stanford has not held equity in Caterpillar, but it should be noted that Palestinians primarily use Caterpillar construction equipment to build houses for themselves in the West Bank, of which 33,000 were constructed in 2011. Third, Combined Tactical Systems, a firm which has also since been renamed, is privately-held and thus not even tradeable on the stock market.

According to the SEC filings, The Raytheon Company is the only firm targeted by SOOP that Stanford has actually invested in during the past decade. SOOP’s criticism of Raytheon focuses on one modified version of its AGM-154A bomb that can be used as a platform for cluster munitions. Stanford invested in Raytheon for a total of one filing period, May 2014, in the last ten years before selling its shares.

SOOP’s attack on Raytheon merits additional scrutiny. As the world’s largest producer of guided missiles, the company conducts cutting edge research to reduce the amount of civilians killed by missile strikes. Moreover, Raytheon’s largest revenue stream comes from the Iron Dome, Israel’s missile defence system that has intercepted over 1000 Palestinian rockets, shooting down 85-90% of explosives fired at Israeli population centres during the last Gaza War. Although Stanford is not currently invested in Raytheon, it is fitting that the only company from which SOOP can even somewhat credibly call for divestment is also the most crucial defender of Israeli lives. SOOP rarely gives much credence to legitimate Israeli security concerns.

These SEC filings are incomplete and imperfect —they may exclude mutual funds and other investment vehicles— but as the best source of information available to all sides, they are revealing. SOOP writes, “We seek to use divestment as a tool to ensure that our tuition and other school funds do not enable violence against Palestinians”, but school funds do not currently support these companies. It appears that the larger goal of the divestment campaign is to delegitimize Israel and lay the groundwork for more comprehensive anti-Israel activism.

SOOP claims in its “Responses to Divestment Concerns and Misconceptions” section that it does not wish to delegitimize the Jewish state and skirts the issue of whether SOOP is associated with the larger BDS movement, noting, “While some members of our coalition have officially endorsed the BDS movement, Stanford Out of Occupied Palestine, as a coalition, is focused on selectively divesting from corporations…” SOOP attempts to distance itself from BDS yet does not deny that it supports BDS, a movement which goes beyond divestment in calling for sanctions and full consumer, cultural, and academic boycotts against Israel. SOOP merely declares that it is currently “focused” on a more palatable platform of divestment from specific companies that Stanford is not invested in anyway.

It is understandable why SOOP would want to politically shield themselves from association with BDS. Many prominent advocates and regional leaders of the movement make openly anti-Semitic claims, from yelling “Kill the Jew” to blaming the Charlie Hebdo attacks on Mossad, fail to recognize Israel’s right to exist, and oppose a two-state solution. It is troubling that members of the SOOP coalition, including the Arab Student Association at Stanford, positively reference BDS in their letters of support for SOOP, but the connections between SOOP itself and the BDS movement are far more insidious.

The head of SOOP recently sent a Google document titled “Divestment Education” full of links to the Stanford Conservative Society to inform its members about the divestment movement. The document included a BDS section with 6 links, shown in a screenshot below, that discuss and defend BDS. One linked article praises a speech that rejected the Jewish people’s right to establish a state in mandatory Palestine and called Israel a “Jewish supremacist state. A linked BDS video calls for boycotts and sanctions, celebrates Israel’s growing fear of becoming a pariah state, and solicits donations for the Palestinian BDS National Committee. How can SOOP send out a video soliciting donations for BDS and still claim to not have taken a position on the movement? Indeed, SOOP repeatedly uses a Palestinian request for BDS – one which is not representative of Palestinian people –  as justification for their movement. SOOP also provided a “BDS Primer” that includes a call for sanctions and consumer, cultural, and academic boycotts of Israel. If SOOP is truly neutral or undecided on the issue of the BDS movement, how can it share calls for boycotts and sanctions?

All of this information, ranging from the lack of Stanford investment in targeted companies to the distribution of materials calling for boycotts to the solicitation of donations for BDS groups, suggests SOOP is disingenuous when it claims its goal is to “use divestment as a tool to ensure that our tuition and other school funds do not enable violence against Palestinians” — this is a group that will not even endorse a two-state solution. Sid Patel, one of the leaders of Stanford Students for Justice in Palestine, wrote an article for Socialistworker.org called “[Planning for BDS at Stanford](http://socialistworker.org/2014/11/26/planning-for-bds-at-stanford)” about SOOP’s divestment campaign, which Patel calls a “major milestone” for SJP. SOOP divestment is clearly being used as a stepping stone to BDS, a movement which SOOP at least tacitly supports.

SOOP may deny these claims, but its actions suggest otherwise. When an organization writes that “Israel’s democratic principles only apply to its Jewish citizens”, calls Israel an apartheid state, shares radical BDS promotional material, refuses to endorse a two-state solution, and hides behind an empty demand to divest from companies in which Stanford is not even invested, it deserves to be exposed. I urge the ASSU to vote against the divestment proposal because it is a transparent attempt to delegitimize Israel by an informal BDS front.

*Correction: *Stanford invested in Raytheon in May 2014, not February 2014. The original article has been updated with this revision.

Stanford’s ASSU Divests from its own Legitimacy

A response to “Stanford must divest from the occupation of Palestine”